Zimmerly family article to be in June New Mexico Genealogist

I wouldn't say that it takes me a long time to do things, but it's been nearly three years since I did my presentation on the Zimmerly family, and I just recently submitted the article to the New Mexico Genealogist. In June, 2011, my article "The Zimmerlys of Socorro: A Swiss Civil War Soldier and an Old New Mexican Family" will be published in that journal.

Here is a teaser from the article:

"Samuel Zimmerly was living in California when he joined the army on October 3, 1861. This sandy-haired carpenter signed his name to the muster rolls at Camp Latham, a military installation near Los Angeles, California. We don't know how or when Samuel began living in California. We can guess why: many people came to California during the 1849 Gold Rush seeking fortune. Apparently, Samuel was not one of the fortunate ones, as his occupation indicates. He may have joined the army in order to find consistent employment; or, he may have been seeking adventure. Again, we don't know.

"A transcription of the Regimental Descriptive Book gives this description of Samuel Zimmerly: he had a "sandy"complexion, "black" eyes, and sandy hair. He was 5'8" tall, and was 21 years old when he joined. This means that he was born in 1840. A family history claims that Samuel's exact date of birth was March 14, 1837; however, no documents could be found that confirm that birth date."

The article doesn't just talk about Zimmerly, though. It also talks about his wife, Paubla Torres, and her lengthy ancestry in New Mexico.

If you are interested in reading the article, you could become a member of the New Mexico Genealogical Society this year, and NMGS will send you a copy of the June 2011 journal, as well as the March issue that is already published and the September and December issues which will be published later. Not only would you be able to read my article, but you could help out a great organization and read a lot of good articles about New Mexican genealogy. Click on this link for details on how to become a member.
Posted by Robert Baca at 8:07 PM No comments: Links to this post 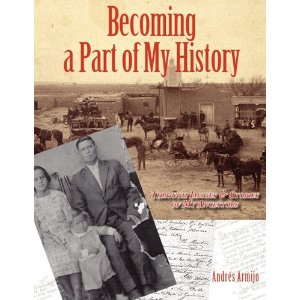 Andrés Armijo presents on his first, recent publication "Becoming a Part of My History: Through Images & Stories of My Ancestors" - People's Photography and Family Research at its Best.

This project stems out of years of genealogical research, oral history interviews and the recovery of family images and artifacts. Vernacular photography, or "people's photography" enlightens a family's past, while oral histories also illuminate photographs. Both aspects of family research are in potential danger of being lost, and it is through this recovery project that Andrés Armijo shares insights, guidance, stories and oral histories about his family for all ranges of audiences. In this presentation, Armijo will share excerpts from select chapters of the book, and the photographs (and moving pictures, or home movies as we know them) that accompany them. Interaction, discussion and questions in this multi-media presentation are encouraged.
This program is free and open to the public

For more information, please visit our website at www.nmgs.org
Posted by Robert Baca at 6:07 PM No comments: Links to this post

Email ThisBlogThis!Share to TwitterShare to FacebookShare to Pinterest
Labels: Announcements

10:30 AM
Albuquerque Main Library – 2nd Floor
501 Copper NW
Albuquerque, NM
The New Mexico Genealogical Society
In cooperation with the
Albuquerque Special Collections Library
present
Tim Kimball
HISPANICS WHO MADE
AMERICAN NEW MEXICO
1846-1851
Donaciano and Juan Bautista Vigil, Curas Antonio Jose Martinez, Ramon Ortiz, Jose Manuel Gallegos and Jose Leyva, Vicario Juan Felipe Ortiz, Colonels Diego Juan Archuleta, Pablo Montolla and Manuel Cortez, Francisco Sarracino, Ramon Luna, Manuel Alvarez, Albino Chacon, brother and sister Trinidad and Gertrudes Barcelo, and Juan de Jesus Maese shared a love of New Mexico.
Traditional history emphasizes the differences between these patriots and their alleged failings.  They and their conciudadanos were admirable men and women with much in common, sharing many goals but taking different paths.  These Hispanic leaders provided continuity in governance and established a viable American (but distinctive) New Mexico in a stormy sea of jingoism, racism, and antebellum national politics.
Tim Kimball is an amateur historian and Army-trained intelligence analyst with a 1967-68 tour in RVN.  He received an M.A. in Anthropology from the University of New Mexico, is literate in Spanish and German.  Kimball has a special interest in archival research on occupation-era New Mexico and its application to a more complete interpretation of the period.  He lives in Corrales with his wife Nancy.
This program is free and open to the public
For more information, please visit our website at www.nmgs.org
Posted by Robert Baca at 3:49 PM No comments: Links to this post

Joel Wigglesworth inherited three historic videos about Socorro, New Mexico. Below is a screen shot of one of those videos: 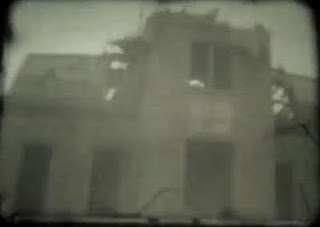 This photo shows the demolition of the Socorro Courthouse.

Click on the underlined words below to view the three videos:

1. Socorro County Courthouse. According to Joel W.: "This is footage of the Socorro County Courthouse being torn down circa 1939. Socorro county, New Mexico. This film came into my possession about a decade ago, and I decided to post it here for its historical value. The name on the box the reel was in appears to read W.E Mundy, Socorro, New Mexico."

2. Socorro 1.  According to Joel W.: "This film came into my possession about a decade ago, and I decided to post it here for its geneaological and/or historical value. Contains footage of kids playing, misc people, and it appears that people are assembling for a wedding, dance, or party. The name on the box the reel was in reads Pete Gallegos, PO Box 1, Socorro, NM."

3. Socorro 2. According to Joel W.: "This film came into my possession about a decade ago, and I decided to post it here for its geneaological and/or historical value. Contains footage of misc people, some cars, the front of someone's house, and the plaza in Socorro, New Mexico. The name on the box the reel was in reads Pete Gallegos, PO Box 1, Socorro, NM."

On May 6th, I attended the 2011 New Mexico History Conference. This conference, which is put on annually by the Historical Society of New Mexico, was held this year in Ruidoso, NM. This was my first conference as an attendee and as a presenter.
I presented a paper that I wrote especially for the conference titled "Luis Maria Baca and the Socorro Land Grant Controversy". In the paper, I discussed the probability that a certain Luis Maria Baca of Lemitar forged Socorro grant papers in order to have the grant validated by the U.S. government. I looked into his possible motivation for why he would have forged the papers. Below is an excerpt from my presentation:


Luis Maria Baca certainly would be in a position to possess Governor Armijo’s documents. After marrying Ramona Armijo, the adopted daughter and heir of the governor, Luis himself took possession of Governor Armijo’s estate. It could be imagined that Luis had been sorting through the papers of the late governor when he came upon this important document. However, why did it take him so long to find it? He had been living in his father-in-law’s home for nearly a decade and a half.

Luis Maria Baca and his three brothers moved to Lemitar in the early 1850s. Although he had the same surname as many of the original settlers of Socorro, it does not appear that he was closely related to any of them. Many of the Socorro families came from the Belen area, while Luis’ family was from Peña Blanca. He possibly did not know any of the families before coming to Socorro area.

Luis Maria Baca and his brothers were the grandsons and heirs to Luis Maria Cabeza de Baca of Peña Blanca. Luis’ grandfather and namesake had once been given a half a million acre Spanish land grant in Northern New Mexico, but had abandoned the property due to Indian attacks. His heirs, who included scores of children and grandchildren, petitioned the United States government for land. The heirs received five 100,000 acre parcels of land that were spread through the territories and states of New Mexico, Arizona and Colorado. It does not appear the Baca brothers of Lemitar received any of this land.

I intend to revise this paper for publication. The original presentation was 6 pages long, written for a 20 minute time limit. I want to include more information, as well as add citations. I will let the readers of my blog know when my paper is ready for publication and which journal has published it.

I was not able to go to many of the presentations, as I had arrived at 11 AM on Friday morning, and left 24 hours later. However, I was able to see the other two presenters who spoke about land grants, genealogist Henrietta Martinez Christmas and the state historian Dr. Rick Hendricks, and I also saw a presentation by Andres Armijo, the author of "Becoming a Part of My History". I also attended the awards banquet that night.

As I usually do, I purchased a few books. I bought the part II of "Sunshine and Shadows in New Mexico's Past: The Territorial Period". Nearly a year ago I purchased the Part II, which dealt with the Spanish Colonial and Mexican Periods. Both books were published by the Historical Socity of New Mexican and Rio Grande Books.

I also found two books that I've been looking for for a while. The first "The California Column of New Mexico" by Darlis Miller is about the 2,000 plus soldiers from California that arrived in New Mexico during the Civil War,and the 300 plus who stayed, married, had families and contributed to the culture and history of New Mexico. The second book is "The Territorial History of Socorro, New Mexico" by Bruce Ashcroft. This book is one of the few histories of my hometown.

I hope to attend the next New Mexico History Conference in 2012, which is to be in Santa Fe. That one will be celebrating the 100th anniversary of New Mexico as a state.
Posted by Robert Baca at 6:37 PM 1 comment: Links to this post

The New Mexico Genealogical Society and the Albuquerque Genealogical Society have teamed up to help out a local genealogy library. The organizations donate all profits from Amazon to the Special Collections branch of the Albuquerque Public Library. Just by placing your Amazon.com orders through a link on this web site, you are helping to purchase books and supplies for the library. (That applies to Amazon orders only.) Click on this link to purchase a book through Amazon.com.

Categories in this Blog

My other websites and blogs

Nancy and I participated in the 2008 New Mexico AIDS Walk. This walk supported New Mexico AIDS Services, Inc. Although this walk is over, we are still collecting money for this good cause. Please donate by clicking on this button.

What's going on at the "New Mexico Genealogical Society Blog"